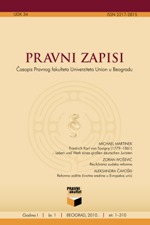 “CATCH ME IF YOU CAN”: REFLECTIONS ON LEGAL (UN)ACCOUNTABILITY OF TRANSNATIONAL CORPORATIONS FOR HUMAN RIGHTS VIOLATIONS

ABSTRACT/SUMMARY
On 20 September 2011, European Court of Human Rights delivered its judgment by which it declared Russian Federation responsible for a violation of YUKOS corporation’s rights to a fair trial and the peaceful enjoyment of property, guaranteed by Article 6 of the European Convention on Human Rights and Article 1 Protocol No. 1 to the Convention. The judgment is one of many judgments delivered by the Court in which it ruled that corporations were entitled to protection under the Convention. In contrast, despite the fact that documentary reports on human rights violations committed by transnational corporations first appeared even back in the 1970s, up to nowadays, a legally binding international instrument that would regulate legal accountability of transnational corporation for human rights violations has not been adopted. With the rare exceptions, neither national constitutions provide for a possibility to hold non-state actors, including transnational corporations, to account for constitutional rights violations.

In the meantime, boosted by economic globalization, supported by World Trade Organization, International Monetary Fund and other international organizations, and accompanied by the protection stemming from bilateral international investment agreements and regional free-trade agreements, transnational corporations have acquired a quasi-sovereign power which made them capable to dominate in international relations and global economy together with the states. At the same time, by successfully using legal gaps, they have been avoided accountability for human rights abuses not only in developing countries but also in all industrialized countries which traditionally rest on the rule of law.